BabeCasino is a unique site when it comes to the features and the welcome banner. For a 2017 website, it has one of the largest gaming libraries available in the arena. Let’s explore what else BabeCasino has to offer.

NetEnt, Cryptologic (WagerLogic), Iron Dog Studios, NextGen Gaming, iSoftBet, PariPlay, Genesis Gaming, OMI Gaming, Genii, Red Tiger Gaming, Tom Horn Gaming, Spigo, Multislot, Ezugi, Playson, EGT Interactive, Wazdan, Casino Technology, GameArt, Booming Games, ZEUS PLAY, Mr. Slotty, Join Games, Red Rake Gaming, Habanero and Betconstruct. Games can be filters based on software to find locating and playing one seamless.
Video slots are in plenty at BabeCasino. Table games are also available, with options of playing roulette, blackjack, and banco, under different themes that include 3D. Those who are into slot games are also covered, as well as those who prefer lottery, casual games, and scratch cards. Live casino is also an alternative, with a large selection open round the clock; they have a variety of table games under this category.
Mobile gaming is, unfortunately, something BabeCasino doesn’t have. That means that instead of playing on the go on mobile devices, players are restricted to their desktops or laptops. There is, however, 3000+ games to choose from, where you can play with free or real money.

Deposit methods include MasterCard, Todito Cash, Skrill, Neteller, JCB, Visa, Entropay, American Express and EcoPayz. When it comes to withdrawals, you get Visa, Entropay, Neteller, EcoPayz, JCB, MasterCard, American Express and Bank Wire Transfer. This makes for a modest list of alternatives that you can use. They are however international for the most part.
When making a withdrawal, e-wallets will have you waiting for the standard less than 24 hours. Credit and debit cards take about three to five days while the bank transfers three to seven days. Checks aren’t offered at BabeCasino. The pending time is an impressive one hour, something that’s rare to see. According to the website, the maximum withdrawal is $50,000 per month, though there are some terms and conditions. The limit per transaction is $10,000

Languages that you can expect to find when using BabeCasino to enjoy online casino games in English, Spanish, Swedish and Portuguese. Live chat is however not available 24/7. The site places the times at noon to 1 am (GMT+2). Should you require emailing between then, the contact email is [email protected]
GAP Entertainment N.V. owns BabeCasino and has a license under the Government of Curacao. Their affiliate program is BabeCasino, where members can make an extra income even as they are playing. The site first launched in 2017.

Though being new, BabeCasino has done a few different things to stand out from the crowd. That is based on the number of software providers they have but also the massive library of games they do have. They are an online casino you can check out, even for curiosity. 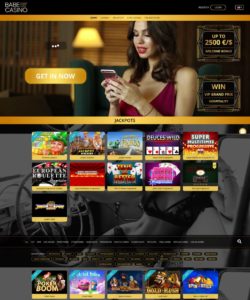