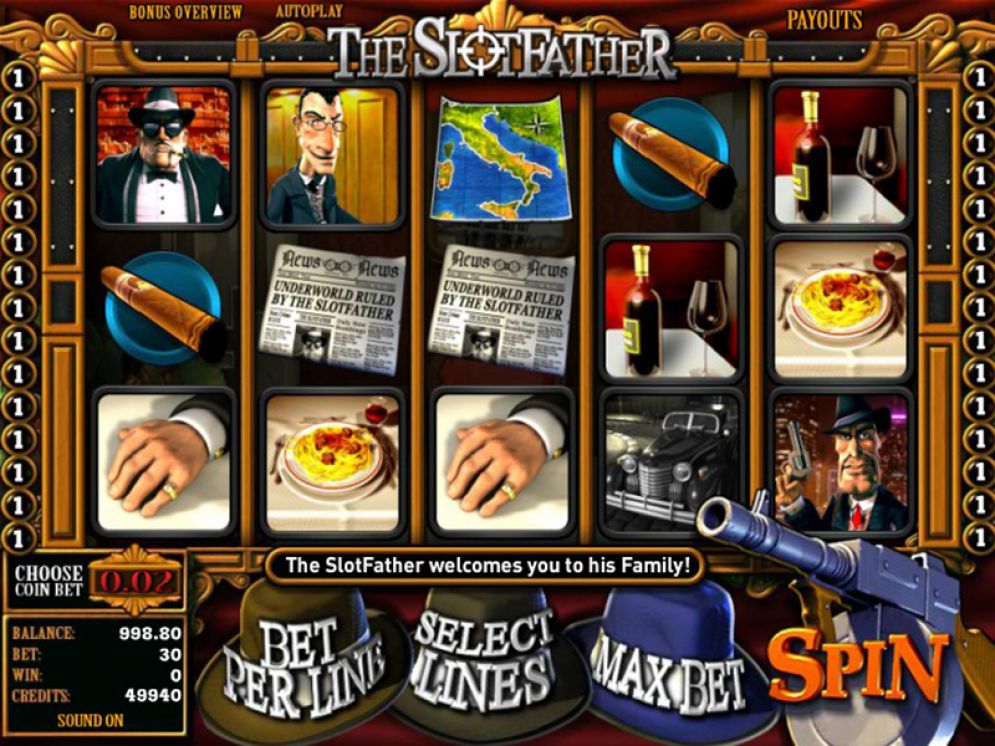 Are you looking for a game with cool graphics and numerous rewards in the form of bonuses? Choose the Slotfather. This is a slot game that has 5 reels and 30 paylines. Most players like it because it includes a progressive jackpot which can make you win a good amount of money. As you play the game, you will love the Italian music that accompanies it. The game looks fantastic and has a lot of bonus features that you can trigger easily. Betsoft software is the company behind this progressive video game.

This slot game use a theme of mafia characters from the Godfather movie to boost your imagination and make the slot game different from the rest. The game was set when online gambling became legal in Nevada. A lot of mobsters in the 1940s emerged and started gambling turning Las Vegas into a gambling den. Mafia families from Chicago and New York started establishing their own casinos leading to the growth of the gambling business.

Features of the Slotfather

The Slotfather uses theme related symbols that include a briefcase full of cash, wine, obligatory gangsters, machine gun, cigars, a plate of pasta and an Italian map. Though it does not include a wild symbol like in other games, the bonus symbol includes the briefcase, gangsters and the Slotfather.

When you land more than three slotfather symbols, you activate the bonus round feature. The biggest prize comes from landing five slotfather symbols on the paylines since this can make you win the progressive jackpot which can be as high as $ 5000. Slotfather gives you the chance to wager 5 coins per each payline. You can bet up to $ 150 per every spin.

To enjoy this game, start by adjusting your bet value according to your budget. You can use the “coin bet” to regulate your coin value which ranges from 0.02-1. You can also use the “select line” to choose the number of lines you would like to bet starting from 1-30. The “max bet” lets you set the maximum bet if you are a high roller. If you want smooth gameplay without any interruption, you should use the “auto-play” to set your reels in motion. The spin button starts the game.

This slot game has offers that no player can refuse. It takes you the world of crime by featuring interesting characters and funny dialogues to capture your attention. Both new players and experienced players will enjoy the thrill of this game due to its exciting payouts. You can play this slot game for free or to win real money.

Play The SlotFather for Real Money